Why Polymesh: Why We Built a New, Fit-For-Purpose Blockchain

With the Polymesh ITN recently released and the mainnet launch only a few months away, we thought we would re-introduce our motivations for building Polymesh in more granular detail, without the technical jargon.

Here we answer a few questions about why we built a new purpose-built blockchain instead of building on existing blockchain technology, and the particular problems preventing institutional use that Polymesh offsets.

What problems prevent blockchain from being used by financial institutions?

Institutional adoption of security tokens has five major barriers to entry: governance, identity, confidentiality, compliance, and transaction finality. These five elements pose a problem for blockchain’s use by institutions as most actually contradict the core principles of the blockchains they were built on, like anonymity.

Our belief is that for security tokens to be adopted by institutions, we need to provide an infrastructure that can support those strict mandates.

Capital markets also have strict requirements around identity and KYC/AML. Regulators require market participants to verify all participants in every transaction. Our belief is that for security tokens to be adopted by institutions, we need to provide an infrastructure that can support those strict mandates. This requires incorporating identity verification beyond individual issuers and investors, to include participants such as block producers who will bring about transaction finality. This prevents pseudonymous entities from participating in the network and receiving transaction fees, but also contributes to the security of the chain.

A further issue is that trades and positions should be viewed as intellectual property, but most public blockchains make this information available to anyone. To address that, you need confidentiality, so you can protect your IP. Finally, you also need compliance. This entails providing an environment which allows the enforcement of transfer restrictions at scale for a large number of asset holders and assets. 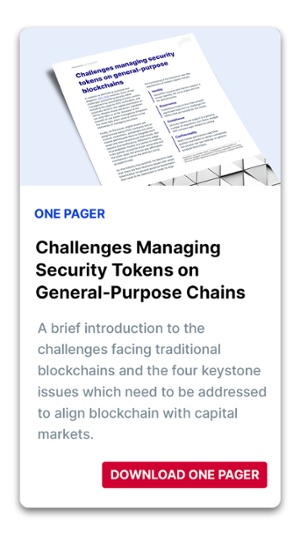 Why did Polymath switch from focusing on standardization to building a new blockchain?

Previously, Polymath had attempted to make the Ethereum blockchain compatible with capital markets by driving standardization for security tokens on that existing blockchain infrastructure. Standards are essentially conventions guiding the development and use of the technology. In 2018, the existing multiplicity of standards was requiring industry participants to perform extra due diligence on the code of security tokens themselves, ultimately making a process that should be more efficient into a more burdensome one.

Polymath took the initiative to drive standardization to improve the efficiency of security tokens and enable capital markets to take advantage of their true value. We brought industry participants together to form a unified standard, which became ERC 1400. Yet, our continued engagement with banks, institutions and other market participants made it clear that ERC 1400 was not enough to address the needs of capital markets.

To help understand why we built Polymesh, it’s useful to compare it with another relatively recent innovation: the Internet. In the early days, the internet was running on existing phone lines with very low connection speed. In 1991, its connection speed was capped at 14.4 kilobytes per second– not even a whole megabyte! As a result, it was limited in functionality. It took 7 years to quadruple that speed using existing infrastructure, not to mention millions of dollars in research and development. Yet users still demanded increased speed to deliver new services or experiences.

Polymath took the initiative to drive standardization to improve the efficiency of security tokens and enable capital markets to take advantage of their true value.

In the case of the internet, the industry was constrained by legacy infrastructure preventing new services from being delivered or even imagined. We saw tokenization in the same way. While it was possible to build on existing infrastructure further, extensive improvements were needed before blockchain could meet the specific needs of capital markets, but changes to the technology would only involve lengthy phases of tiny incremental improvements. We chose to build a new blockchain specifically for security tokens to quicken the process of delivering value to financial institutions with an infrastructure fit for purpose.

Essentially, the problem was that market requirements contradicted the principles that existing chains were built on. Regulated capital markets require identity, compliance, confidentiality, proper governance, and deterministic finality. Yet the existing blockchains were built for pseudonymity, censorship resistance, and transparency, and most relied on probabilistic settlement. By building a new purpose-built chain, Polymesh, we could ensure the blockchain was built to fit with the principles required by capital markets.

What problems does Polymesh offset as a new technology?

With Polymesh, our goal is to not introduce new questions, constraints, or processes that users would then need to become familiar with. We also aim to avoid introducing new considerations for regulators. Polymesh’s mission is to automate and simplify capital markets so market participants can capture the value of emerging blockchain technology without highlighting the potential problems or complexities of that technology.

Polymesh’s mission is to automate and simplify capital markets so market participants can capture the value of emerging blockchain technology without highlighting the potential problems or complexities of that technology.

We talk a lot about transparency, but there’s a lot of risk associated with it as well. Large investment banks are not too keen on having everybody understand their positions and trade history, so having confidentiality about these issues is always something we’ve felt strongly about.

In the legacy financial system, confidentiality is addressed with layers of custody and often based on an omnibus account, at least in North America. In the omnibus model, when transactions take place, you can’t see the asset moved or who holds it, unless the transaction is moving an asset in or out of the custodian’s account. This is an approach we’ve seen on blockchain, but one which we think is eliminating a lot of the benefits and value that the blockchain brings in terms of automation and executing corporate actions.

Instead of applying existing principles, we focused on identifying the original problem organizations were trying to solve through omnibus accounts, which was making sure one’s trade and positions are private. In the omnibus account, there’s a vehicle to disclose this information if asked, but it’s not out in the open for everybody to see. We wanted to replicate this on Polymesh.

Typically on public blockchains, users can use layer 2 solutions to make transactions and balances confidential, but only by compromising with compliance. For layer 2 solutions to maintain privacy, issuers are unable to configure compliance rules or report on ownership. It was important to us that users aren’t forced to make this choice between privacy, confidentiality and compliance. This is why asset confidentiality plays such a prominent role in Polymesh’s build.

Download our guide to dive deeper into the problems preventing capital markets from migrating to blockchain, learn more about the evolution of security token standards on our blog, or check out the third post in our Pillar series to discover more about confidentiality on Polymesh.

What's So Special About a Purpose-Built Blockchain?

Polymath's idea to build Polymesh arose from a need to better align blockchain with the...

As we move closer to the launch of Polymesh Mainnet, we’re excited to release a pivotal...