Blockchain governance is the set of rules that outline how a chain is managed, how changes are implemented, and who the key decision makers are — simply put, it’s the constitution that guides a blockchain. Governance can be a very important and difficult topic for any blockchain, not to mention one built for security tokens, where the chain is not only the source of truth for potentially billions of dollars, but must also allow investors, issuers, and capital markets participants to fulfill their regulatory obligations.

Look no further than the challenges faced when trying to implement changes to general-purpose blockchains. Not only is a significant amount of coordination required between all nodes running the blockchain’s software, but disagreements on the changes to the chain, or how they should be implemented, can lead to forks (a split of the blockchain leading to 2 separate instances of the ledger up until that point which then continue to operate based on different rules). Who decides which instance of a security token is the right one once a general-purpose chain has hard forked? This situation has no current legal or regulatory certainty, creating an environment that capital markets participants and regulators alike will choose to avoid. 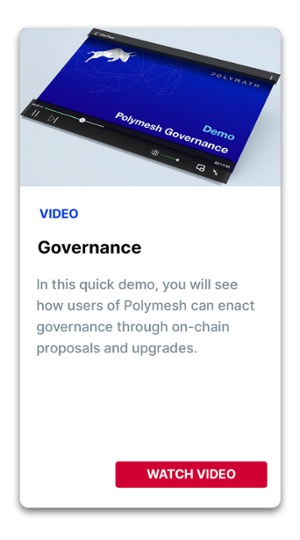 Polymesh addresses the challenges that general-purpose blockchains face with governance by building it into the core of the blockchain. This comes to life in two important ways: the approach to upgrades and on-chain governance.

Architecturally, we chose to build on the Substrate Framework. There are many benefits to using Substrate, but key to Governance on Polymesh are Forkless Runtime Upgrades, allowing seamless upgrades on the chain rather than risk hard forks. (This is also what allows Polymesh to be governed completely on-chain, but more on this soon). Without getting into the technical details, this means the ability to upgrade Polymesh is a feature of the blockchain itself, with any changes to the chain (typically recorded IRL) being recorded directly on the chain. This enables users to create proposals and support proposed changes all on the immutable ledger. Learn more about Forkless Runtime Upgrades here and here.

The newfound ability to record and store chain governance information on Polymesh is convenient from a chain management standpoint, but more importantly, gives users of the chain a voice in how the chain is managed and run. This is done through the Polymesh Governance dApp, a user-friendly interface that allows users to submit and show support for the proposals that can guide the evolution of the chain. In our first iteration of on-chain governance we decided on a two-chamber approach familiar to key stakeholders of the regulated securities industry. The first chamber is made up of all POLYX tokenholders. Any POLYX holder can create a Polymesh Improvement Proposal (PIP) by submitting details of their change and bonding POLYX to the PIP. After a cooling-off period, a poll of support begins, where support is shown by POLYX bonded either for or against the passing of the PIP. The PIP with most support will be evaluated and voted on by the Governing Council at the next scheduled meeting. Additional community-supported PIPs may be taken into consideration as well.

The Polymesh Governing Council (GC) is the second chamber in Polymesh. The primary role of the GC is to manage, find consensus, and chart a path forward for the chain. In addition to reviewing PIPs submitted from POLYX tokenholders, the GC can fast-track proposals to deal with emergency fixes and deploy new features during Testnet.

Like all blockchain projects, we know Governance is a difficult topic to get right and we hope that you can help us achieve that goal by participating in Polymesh Governance on our current Testnet. Over time some of the aspects that we hope to improve on are:

The securities industry has a number of existing, well-defined governance and decision making processes. In order to work together with established players and give comfort to issuers and regulators, we need to make small incremental changes in our approach to governance. We look forward to playing a role by creating a structure that facilitates open and transparent dialogue between token holders, issuers, regulators and securities participants.

Governance is our fourth and final piece in the Polymesh Pillar Series, created to showcase how a blockchain built for security tokens could best address the challenges affecting adoption and acceptance of security tokens. Governance, Compliance, Confidentiality, and Identity all have an important role to play in a security token blockchain, removing the roadblocks that most impact adoption and acceptance by financial institutions, regulators, and issuers. That’s why each has been built into the core of Polymesh, removing challenges and bolstering security token adoption.

Check out the other blog posts in our series for more information on the other pillars and how they form the foundation of Polymesh.

What's So Special About a Purpose-Built Blockchain?

Polymath's idea to build Polymesh arose from a need to better align blockchain with the...

Why Polymesh: Why We Built a New, Fit-For-Purpose Blockchain

With the Polymesh ITN recently released and the mainnet launch only a few months away, we...