Why Marketlend’s Tokenization is Big News for Business Lending

The marketplace lending platform is moving into the future of blockchain-enabled business lending, using tokenization to increase efficiency, transparency and liquidity on investments.

Business lending, like virtually every aspect of the financial system these days, is in the sights of blockchain and tokenization innovators. They see opportunities to streamline the slow, clunky processes involved in issuing loans, make it easier for SMEs to raise capital, and entice investors seeking better returns.

Likewise, financial service companies have understood for some time that legacy loan processes can be substantially improved with better tech. A 2018 Accenture and Oxford Economics study, for example, found that improving the technological underpinnings of loan management increased volumes by 15-20% while reducing operational costs by 20%. Tokenization stands to further amplify these benefits.

Using security tokens to facilitate loans from investors to SMEs on the blockchain can reduce the trading friction and transaction costs that exist in the traditional lending model.

Using security tokens (digital representations of securities) to facilitate loans from investors to SMEs on the blockchain can reduce the trading friction and transaction costs that exist in the traditional lending model. It can also remove geographic barriers in lending and improve loan security and transparency, thanks to blockchain’s immutable and traceable nature.

While it will likely take longer for larger organizations like banks to get to the stage where security tokens and blockchain are integrated into their lending processes (though they inevitably will), smaller and more agile players are already beginning to show what’s possible.

One such player is Australia-based lending platform Marketlend, which is attempting to make it easier for businesses to raise capital by accessing credit from investors using a blockchain-enabled solution. The company has created a marketplace that facilitates prompt lending using Polymath technology to create, issue, and manage its security tokens.

So far, Marketlend has tokenized three corporate loans, and the company says there are more to come. The company is using tokenization in an effort to increase efficiency, transparency and liquidity on investments.

Let’s take a closer look at each of these business advantages. 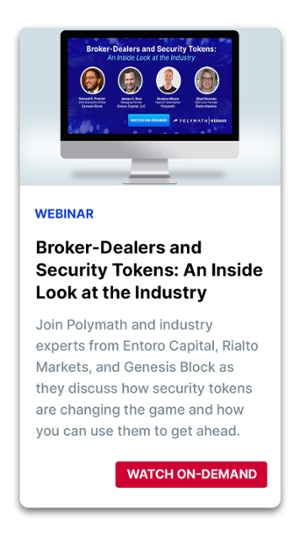 By white-labeling Polymath’s ready-made platform, the company was up and running with tokenization capabilities in a few weeks, and could stay focused on its core business.

When the Marketlend team first got the idea to use security tokens to power their platform, they wanted to be quick to market. This meant that spending months - or even years - and hundreds of thousands of dollars to build their own tech wasn’t an option. By white-labeling Polymath’s ready-made platform, the company was up and running with tokenization capabilities in a few weeks, and could stay focused on its core business.

The likes of Marketlend are setting the standard for the future of blockchain-enabled business lending, and without having to build a thing. Many more will follow!

10 Questions Every Broker-Dealer Needs To Ask About Security Tokens

Broker-dealers shouldn’t ignore the security token market, and soon they won’t be able...