Like custodians in traditional finance, digital custodians are faced with choosing between custody models, the two most prominent being omnibus and individual segregation. Interestingly, the omnibus custody model is chosen quite frequently when it comes to holding security tokens, despite certain key issues.

Here we explain exactly what the omnibus custody model is and why it’s being used by custodians, despite the challenges it poses for compliance, transparency, and– perhaps most importantly– as a golden source of asset ownership.

When it comes to how you hold securities in custody, ‘omnibus’ refers to all securities being held in one account or in the control of one entity. For instance, imagine clients of Bank A all have shares for Company X. If Bank A has an account with a custodian, then that custodian would hold all the shares for Company X under their management, essentially in one account.

From an issuer perspective, when Company X views their corporate registry and asks “who owns my shares?”, the individual holders won’t be visible.

With the segregated model, the shares (or in the case of digital assets, security tokens) are directly registered in the name of the investor. This means each shareholder or tokenholder has their own account at the custodian. When an investor sells their shares, the shares or tokens get taken out of a dedicated account. In contrast, in the omnibus model, what is taken from the account when an investor sells their shares will simply be any shares or tokens and not a specific set. The balance produces and there are no individual markers.

The difficulty with managing digital securities in an omnibus custody arrangement concerns why you might want to use tokens in the first place. People primarily want to use security tokens to give issuers a level of transparency into who their actual end tokenholders are, and to apply any compliance restrictions around transfer and ownership. Yet when you have an omnibus custody arrangement, transparency and compliance break down.

Compliance is a challenge because if all tokens are (or appear to be) owned by a single entity on-chain, then the compliance rules programmed into the token can’t be used. Likewise, when an issuer wants to view and build up their capitalization table to see who owns their shares, the individuals who own them won’t be visible.

Ultimately, the omnibus model is problematic for digital securities primarily because it fails to bring the full benefits of using tokens. With security tokens, issuers, investors, and other stakeholders are looking for transparency for public and private securities and the ability to enforce compliance standards for private securities, but neither of these elements work effectively in omnibus accounts. 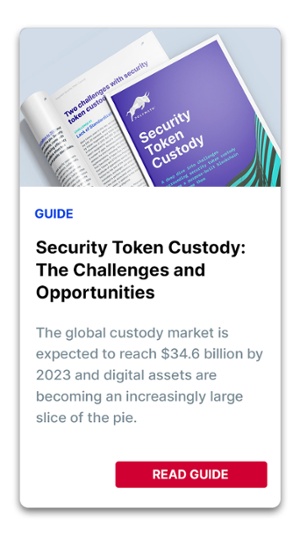 The other challenge is that regulation written to-date largely refers to recording securities in book-entry form– it doesn’t yet refer to security tokens.

“Book-entry” is synonymous with an internal ledger. Regulation about recording securities in book-entry form essentially requires custodians to record ownership details for the securities they have in custody in their own internal ledger. Yet there are no clear guidelines for security tokens on blockchain.

It’s reasonable to claim that ownership records are maintained on a blockchain, but there is a lot of nuance at play here that could lead to confusion in the case of an omnibus custody account where a custodian bank is the on-chain owner. If the blockchain is cited as the book or record of truth for ownership records, then as the on-chain owner of the security tokens, the custodian is technically the one who owns the shares.

The question, then, is who actually owns securities if they’re in an omnibus account with a custodian’s name on it? This is the trillion-dollar question. One way around the issue is to insist that the ownership record is still maintained by blockchain, but stipulate that if it’s an omnibus account, then it’s by book-entry. Unfortunately, it’s not a black and white issue, and there’s no viable solution yet that pleases everyone.

The question, then, is who actually owns securities if they’re in an omnibus account with a custodian’s name on it? This is the trillion-dollar question.

Beyond that, digital custodians often take what they’re used to with traditional securities and model it onto security tokens. In North America, omnibus is considered the norm whereas in contrast, omnibus isn’t quite as common in Europe, and custodians there will often use individual client segregated accounts right out of the gate.

Lastly, although it’s currently not as huge, omnibus has an impact on the clearing side of things. With omnibus accounts there is a bit of capital efficiency you can gain from clearing and settlement. Although security tokens don’t have the volume to really be a problem from that perspective, this would be another reason why custodians would consider omnibus accounts.

Q&A: How to Build Institutional Trust in Security Token Custody

Custody is a key consideration for any institution entering the world of security token...

The global custody market is expected to reach $34.6 billion by 2023 and digital assets...

Institutional investors depend on custodians to safeguard their assets, and in many ways...