Blockchain and Post-Trade Processes: How it Helps, Why it’s Hindered, and What’s Next

According to Accenture, the financial services industry spends an estimated $133 billion USD annually on post-trade securities clearing and settlement. This process of inter- and intra-firm settlement is slow, cumbersome, and expensive, but necessary to reduce error and properly clear and settle authorized payments.

With the maturation and rising popularity of distributed ledger technology (DLT) like blockchain, financial services companies are realizing new opportunities to digitize and automate post-trade activities. Here we take a look at the benefits and challenges of using blockchain technology for clearing and settlement.

When it comes to trade failures, even a tiny percentage of failure can be incredibly costly. The Depository Trust & Clearing Corporation (DTCC), a major institutional post-trade clearing house and the highest financial value processor in the world, estimates that a global failure rate of only 2% results in costs and losses of up to US$3 billion.

One of the main benefits of blockchain is that it offers a more efficient and effective clearing and settlement process.

Where does this high expense come from? To begin with, addressing the claims, penalties, cancel and correct fees and performing manual verification is a time-consuming and costly process. If the stock was borrowed, extra costs might be incurred from interest, or if the failed trade needs to be funded in cash. If it’s near the end of the month, the balance sheet might be impacted as well.

One of the main benefits of blockchain is that it offers a more efficient and effective clearing and settlement process. As with other trade activities, automating post-trade activities like clearing and settlement through blockchain technology brings increased efficiency while reducing room for error, and this ultimately brings another major benefit: significant reduction in cost.

Accenture estimates that blockchain can reduce business operation costs for trade support, middle office, clearance, settlement, and investigations by up to 50% by reducing or eliminating the need for reconciliation, confirmation and trade break analysis. In theory, up to 95% of trade processing and settlement can be automated through blockchain technology.

Let’s take a look at how blockchain benefits clearance, settlement, and reconciliation.

How Blockchain Can Improve Trade Processing

As a form of DLT, blockchain permits ledgers to be shared collectively and securely. Some of its key features include:

When it comes to clearing and settlement, many believe blockchain can revolutionize the system by enabling central counterparties to operate much more effectively, and perhaps eventually eliminating the need for them altogether. By tokenizing assets with cryptographically-secured, self-enforcing contracts, blockchain can automate trade processes and has the potential to make settlement instantaneous, eliminating the need to perform post collateral activities.

The Main Challenge of Using Blockchain to Streamline Post-Trade Processing 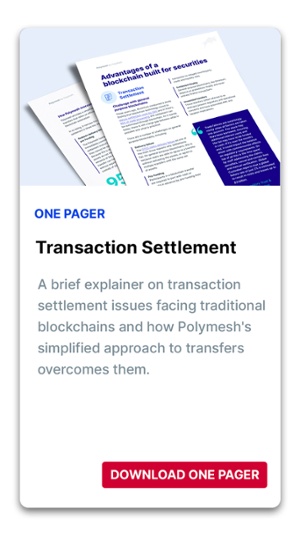 The primary obstacle preventing the implementation of blockchain in post-trade processing is it requires navigating through the complex web of regulation and intermediation in the legacy financial system. Central securities depositories (CSDs), central counterparty clearing (CCPs), and custodian banks perform vital roles in ensuring the accuracy and legitimacy of trades. Utilizing DLT like blockchain for these functions, whether in full or in part, will not occur overnight and will instead require a lengthy process of incremental change.

Despite this challenge, as blockchain technology develops further and financial institutions demonstrate increasing interest in using it, there is rising optimism that blockchain and the efficiencies it brings can eventually be incorporated into post-trade processes. Not only will blockchain’s utilization of smart contract verifications make trades become virtually instant and more secure, but the technology also has the potential to introduce new asset classes and create lower barriers to entry, increasing liquidity and investment.

Even if financial institutions are not currently capable of full implementation of the technology, many institutions are confident that the key to unlocking its potential is held in further experimentation and collaboration, as exemplified by the opening line of the DTCC’s whitepaper on DLT: “DTCC is an industry-owned and governed financial market utility with more than 40 years of experience mitigating risk and driving operations and cost efficiencies for the financial industry. We believe that realizing the promise of distributed ledgers lies in aligning the technology with these core principles to leverage new opportunities and simplify or replace legacy systems.”

Given this observance, it’s likely that in the future, settlement intermediaries will carry on with their existing roles while collaborating between DLT networks, issuers, investors, and regulators in order to establish a central blockchain-based system that can meet the requirements of robust legal frameworks. This type of collaboration will likely be focused on meeting three primary issues:

In fact, we are already witnessing collaboration between institutions, issuers and investors, technology platforms, and regulators when it comes to these matters. More than 81 countries (over 90% of the global GDP) are currently experimenting with some form of CBDC, and the World Economic Forum has mapped numerous blockchain standard initiatives currently underway.

For Polymath, addressing and facilitating the resolution of such problems was front of mind, so we built Polymesh to overcome 5 primary issues with public infrastructure preventing blockchain’s migration to capital markets.

How Polymath is Addressing Settlement

With blockchain, the potential to make securities clearing and settlement more secure, near-instant, and lower in cost is enormous. Yet there’s a large gap between what is practical versus possible, and true implementation won’t occur until issues with compliance and security can be solved. Even with institutional openness to experimentation with the technology, further innovation is needed to break through the barriers preventing it from meeting capital market needs.

For Polymath, addressing and facilitating the resolution of such problems was front of mind, so we built Polymesh to overcome 5 primary issues with public infrastructure preventing blockchain’s migration to capital markets. One of these issues is transaction finality. Most blockchains like Ethereum depend on probabilistic finality and never entirely finalize transactions. Obviously, this poses a great risk for trade settlement.

Polymesh provides the necessary deterministic transaction finality through its use of the GRANDPA finality gadget, an industry-led governance model, a forkless upgrade process, and a comprehensive compliance validation process. This validation process involves using the ‘nominated proof-of-stake’ consensus mechanism to validate the legal finality of payments and verify the title of security token holders.

By using incentivized validators in the consensus protocol, the Polymesh platform also acts as a golden source of truth for ownership, providing participants with confidence in their trades and reducing the need for reconciliation.

Discover other ways Polymesh narrows the gap to blockchain settlement in our one-pager on transaction settlement.

It’s no secret that capital markets are beset with inefficiency that slows down global...

Digital assets, and security tokens in particular, can present major challenges when it...