An Introduction to Polymesh Tokenomics

Tokenomics on Polymesh is the interwoven set of mechanics for how the network protocol token, POLYX, is utilized on the blockchain. We like to think of POLYX as the fuel of Polymesh; it enables the creation and management of security tokens, drives POLYX holder participation through governance, and secures the chain through staking. Tie these pieces together and an ecosystem emerges on Polymesh with POLYX at the centre.

While we’ve touched on tokenomics at a high level in the Polymesh Whitepaper, we have yet to give such an indispensable topic the deep dive it requires. Here we touch on the specific aspects of tokenomics to provide a fulsome understanding of how POLYX operates on Polymesh.

Tokenomics can be explored through how POLYX is supplied, managed, charged, granted, and rewarded on Polymesh, or through the following topics: 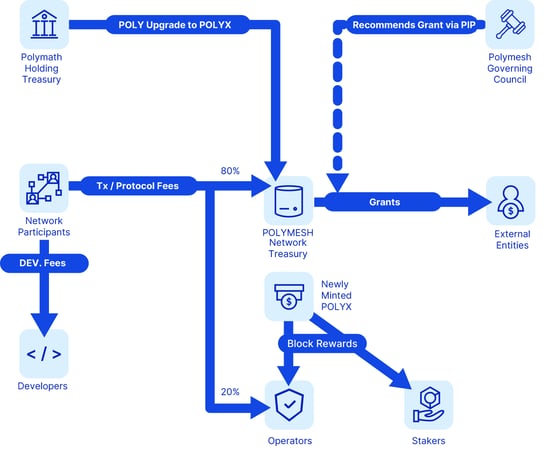 POLYX on Polymesh will not be created from scratch. With the launch of the chain, the main mechanism to build the supply of POLYX is through an upgrade bridge allowing users to upgrade their Ethereum-based POLY utility tokens to POLYX on Polymesh. This upgrade opens the door for users to create and manage security tokens (through Token Studio) and secure the chain (through staking). POLY can be upgraded to POLYX at a 1:1 ratio (i.e. 1,000 POLY = 1,000 POLYX). Polymath recommends that the Polymesh Governing Council maintain the POLY to POLYX Upgrade Bridge for at least one year following the launch of Polymesh mainnet.

Upon the Polymesh mainnet launch, Polymath will upgrade between 240 million and 250 million POLY to POLYX to be deposited in the Polymesh Network Treasury. Newly minted POLYX will be created for block rewards with a maximum of 14% of the total supply minted annually. To prevent the continuous acceleration of inflation, the amount of newly minted POLYX used for rewards will be fixed at 140 million annually once the supply reaches 1 billion POLYX.

The POLY to POLYX Upgrade Bridge is currently available for testing on the Alcyone Testnet.

The Polymesh Network Treasury exists to maintain the network and grow network adoption. It is maintained and managed by the on-chain governance process overseen by the Polymesh Governing Council, accumulating a store of POLYX over time for different community uses. It’s funded in 2 ways:

Network Treasury funds will be disbursed by the Polymesh Governing Council by approving Polymesh Improvement Proposals (PIPs). For the most part, these funds can be then used in 2 ways:

Fees are charged in POLYX for all chain usage. They are split between the Network Treasury and Node Operators, or developers who add to the chain with customized functionality. They also operate to protect the chain from DOS or spam attacks. There are 3 classes of fees on Polymesh:

One of the key types of Network Treasury disbursements are grants used to bolster important development on the Polymesh or other activities in support of the chain. Developers who provide an answer and solution to a specific Request for Proposal, or even address unsolicited solutions, may be provided a grant in the form of POLYX.

Grants and their associated development requirements will be managed by the Polymesh Treasury Committee. Further details on the program will be provided in the near future.

Staking secures the network by aligning the economic incentives of Node Operators and Stakers to the correct operation of the chain through rewards and penalties denominated in POLYX. It’s an important aspect of the Nominated Proof-of-Stake consensus mechanism, which defines which blocks get written to the chain as well as the roles, rules, and incentives of Polymesh.

With Polymesh Staking, Node Operators and Stakers work together: Stakers back Node Operators of their choice with POLYX, and both are either rewarded or fined based on the Operator’s performance running their node (i.e. keeping their node online; writing blocks to the chain per the rules of Polymesh). Stakers can be any POLYX holder whose identity has been verified through a customer due diligence process.

Staked POLYX may be simultaneously used to signal support in Polymesh Governance.

Block rewards and fines are the carrot and stick vital to Polymesh’s Nominated Proof-of-Stake consensus mechanism, and therefore, proper chain operation. For each block created, the Node Operator who created it is rewarded in POLYX along with their Stakers. Failure to meet the performance standards of the chain, however, could lead to Operators being fined in POLYX; in future, stakers may also be fined pending Governing Council approval. Rewards and fines are calculated and enacted per era (every 24 hours).

The total block rewards pool per era is a product of the nominal rewards rate and the total  POLYX staked on Node Operators. They are then split by a number of factors:

Block rewards are newly minted and rewarded each era, increasing the total supply of POLYX up to a maximum annual inflation rate of 14%. Maximum inflation is reached only with a 70% staking ratio (the amount of POLYX staked v. the total POLYX supply). Block rewards are structured to incentivize this ideal staking ratio. When there is less than 70% POLYX staked on the chain, the rewards rate is higher; but, if the staking ratio is above 70%, there is less incentive to stake on Polymesh due to a lower rewards rate. The ideal staking ratio of 70% was selected because it properly balances security for Polymesh and availability of POLYX.

The severity of fines on Polymesh is based on the amount of offending Node Operators across the chain. There are two types of infraction that can lead to a fine: 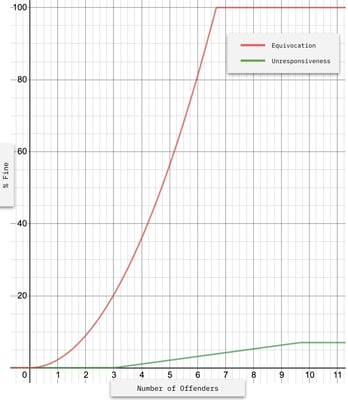 The time has come! We’re thrilled to announce that Polymesh – the world’s first public,...